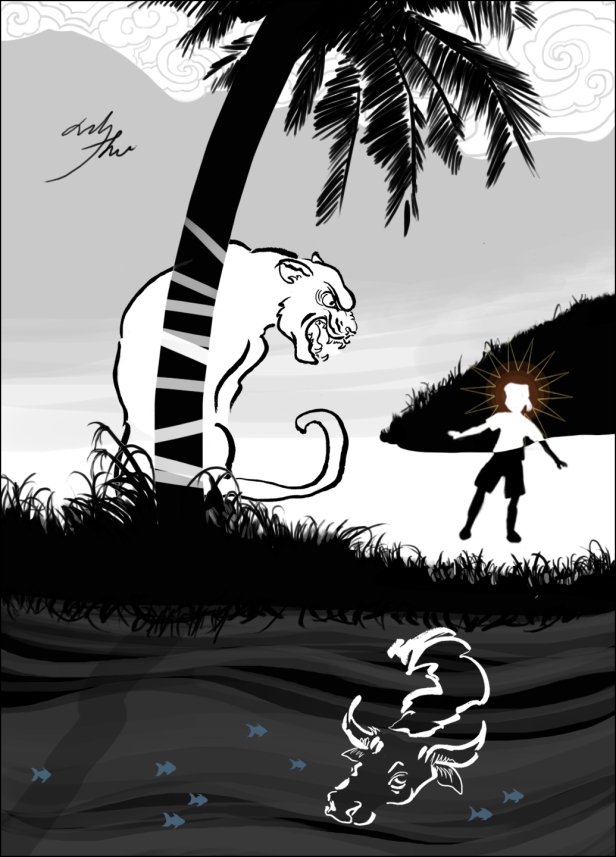 Long long ago before any can remember, when animals and humans still talked with one another, there sat a bird in a tree watching a farmer struggle to lead his water buffalo with ropes tied to its horns.  Bemused, the bird said aloud to itself, “I wonder why the rope is tied to the horns?  Why not lead the buffalo by the nose-nose-nose?”  The farmer understood the wisdom in these words so he pierced the buffalo’s nostrils and from that day on, led the buffalo by its nose.

Meanwhile, a tiger was sitting in the cool shade at the edge of a pond, admiring its golden coat of fur. This was part of its daily ritual for the tiger was quite proud of its spotless appearance and thought itself not only the most beautiful creature but also the strongest.  By now, it was nearly noon and the tiger was hungry. It came upon the farm hoping for an easy meal but stopped at the spectacle of the hard-working duo of farmer and buffalo streaming with sweat as they pulled a heavy plow through the mud.

His curiosity tinged with greed but as is the nature of cats, he couldn’t help but say first, “It’s so strange Buffalo…you toil for this puny human and let him lead you by the nose, but you are so much bigger and stronger! Why do you listen to him?”

The water buffalo was undisturbed.

“He may be small, Tiger, but he has wisdom,” said the buffalo, flicking his tail in the direction of the farmer.  “Ask him and he will show it to you.”

Wasting no time, the tiger approached the farmer, whose face darkened at the sight of sharp fangs and long claws. Tiger said to the farmer, “Buffalo tells me that you have something called wisdom that makes even a great creature as he obey you, will you show it to me?”

“I’ll…I’ll have to g…go and fetch it,” the farmer said, trembling.  “But I don’t dare leave seeing how hungrily you eye my buffalo.  If you allow me to restrain you…say…tie you to that tree over there, I’ll gladly go and get my wisdom to show you.”

Tiger hastily agreed, for he so wanted to see this thing called wisdom and the hunger was becoming quite unbearable.  The farmer proceeded to tie the tiger to the tree with several spans of rope and ran off.  When he returned, he carried with him only a torch, the fear on his face had disappeared.

“You call that wisdom?” the tiger demanded.  “What nonsense!  Now untie me so I can get my meal.”

Tiger bared his fangs, as if to make the point clear, but the farmer said nothing and lit the tree on fire before leading his buffalo away.

The tiger howled and flailed wildly but the ropes held fast.  The flames bit deep, the rope charred.  Finally, Tiger managed to free himself and ran back into the dark of the jungle.  It was a long time before he would emerge again and what a sight he was!  Great black stripes now marred his golden body, burned into his fur by that thing called wisdom.

Buffalo saw the tiger and laughed.  He laughed so hard that he fell over and broke his front teeth on a rock.  Thereafter and always, water buffaloes have no front teeth and tigers stay deep within the jungle, not wanting others to see their shameful black stripes.